Disclaimer: The information presented here is historically accurate only to a certain extent. Some of it was taken from interviews, some of it I learned by talking to people involved, and some of it is just me reading between the lines of whatever information is out there. If you find any falsehoods or if you have additional information, please do not hesitate to contact me. 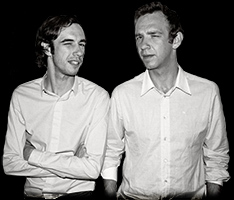 The year is 1998. Stephen and David Dewaele are touring with their band Soulwax having just released the critically acclaimed “Much Against Everyone’s Advice” album. As much as they enjoy doing so, they feel like something’s missing from the experience. They are bored just playing their songs and, in an attempt to escape the rut, they start taking care of the aftershows as well, under the moniker “The Flying Dewaele Brothers” – a name unceremoniously given to them years earlier by Chris Goss, the producer of the first Soulwax album “Leave The Story Untold”, when he witnessed the speeds at which they operated his gigantic mixing console. 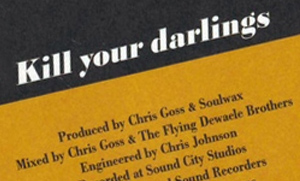 The brothers were all but happy with the state of DJ’ing at that time and how music had become very compartementalized – DJs were very much limiting themselves to certain genres and were not thinking outside of the box. Growing up between crates of records (their dad, Jackie Dewaele aka Zaki, was one of the first real DJs in Belgium) had given them a particularly balanced taste of music. Still, for them it was never about mixing the right or hippest records – it was about having a good time. By 1999, the brothers were both opening on the mainstage (with Soulwax) headlining the second stage (as DJs) at Rock Werchter, Belgium’s biggest festival. In fact, they were ubiquitous – to the extent that some people probably would have thought “it’s those fucking Dewaele brothers again”. So they jokingly renamed themselves “The Fucking Dewaele Brothers”. 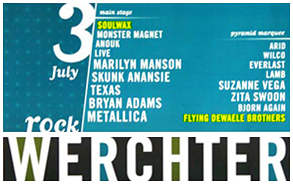 Meanwhile, Mark Coenen, producer at the Belgian radio station Studio Brussel, was working on a radio show called Hank The DJ. The show was inspired by the iconic album “My Life In The Bush Of Ghosts” by Brian Eno and David Byrne, in which samples taken from newscasts were put on top of electronic music. This is where they started toying around with the concept of mash-ups: combining songs that weren’t ever meant to be combined. Originally, different episodes for this show were made by several artists (David & Stephen, DJ 4T4, Praga Khan, Discobar Galaxie, Extince) but as this became too complex a production, the Dewaele brothers took charge of the entire show. Their episodes ran from 1999 to 2000. For more information, please check out our Hank The DJ page. 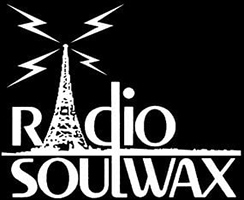 After Hank The DJ, the Soulwax brothers, never one to shy away from from adding a bit of confusion, got their own show on Studio Brussel: Hang The DJ. The idea was pretty much the same as with Hank The DJ: every week, the brothers would do a one-hour radio show playing off-beat music, mashups and remixes. In their own words, more effort was put into getting these mixes done – in one interview they mention that a mix for Hank The DJ would be done in a day, where a Hang The DJ mix would be an effort spread out over an entire week. The show originally ran from 2001 to 2002, with re-runs in 2003. More information is available on our Hang The DJ page. 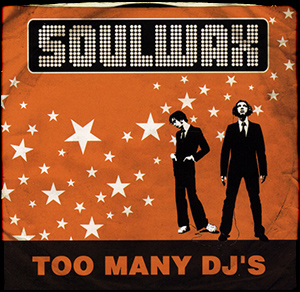 The Belgian label PIAS Recordings (Play It Again Sam) has been giving the Soulwax brothers absolute freedom for many years, even though all their foreign adventures have meant nothing but a loss for the label. This fact notwithstanding, Kenny Gates, head of PIAS, is convinced that he has struck gold with the newfound interests of the Dewaeles. He relentlessly tries to convince them to create an album in the same style as their mashups and radio shows. Stephen and David eventually give in, handing over a list of 187 tracks they want to use on the album – not thinking for a second they would get all the clearance required. Half a year, over 860 emails, 160 faxes and uncountable phone calls to 45 record companies later, the end of an administrative nightmare means the birth of their groundbreaking album, “As Heard On Radio Soulwax Pt. 2″, consisting of 45 (+ 1!) tracks composed of elements from 114 different tracks. They release the album as 2manydjs, a play on a Soulwax song called Too Many DJs. 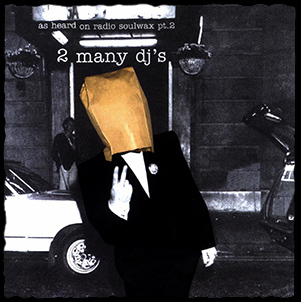 It was nothing short of a smash hit. The New York Times called it the best pop album of 2002. It ranked second on The Face‘s list of best albums of 2002. Spin called it 2002’s best novelty record. Pitchfork Media listed it as #93 on their top 200 albums of the 2000s. Finally, in 2013, it was voted best Belgian dance album ever in the Elektropedia Awards.

The unexpected success of the album caused several bootleg spin-off albums, blatantly reusing the album’s name and cover. The albums were nothing more than fragments from the Studio Brussel radio shows, many of which were at the time available online for free on the Soulwax website, pasted together by amateur bootleggers, using shoddy transitions that lack the finesse of the original album. Still, these albums were, for many fans, the first introduction to Radio Soulwax.

Which finally brings us to the raison d’être for this website: to give credit where credit is due. The bootleg albums, while certainly enjoyable, do not do justice to the original radio shows and the tracks played on these shows. The cut & paste jobs are often poorly carried out and the CD booklets often list wrong tracks. Building on the work of many fans worldwide, I am attempting to provide as much information as possible on the different Hank The DJ and Hang The DJ shows, as well as to identify which parts were used in which bootleg albums.